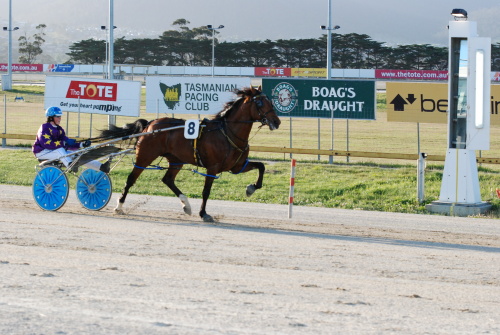 THE Gedlee juggernaut gained more momentum in Hobart on Sunday night when the talented four-year-old demolished a C4-C5 field over 2090 metres at Tattersall’s Park.

Gedlee is now unbeaten from four starts this preparation with the latest victory his seventh in succession.

He has won eight of his past 10 with the other efforts seconds to Lanercost in the Australian and Tasmanian derbies.

The rising superstar has been well placed this time in by his trainer Phil Rawnsley who plans to aim the stallion at the Launceston Cup on December 19 which he hopes will be a prelude to the Group 1 Tasmania Cup.

Depending what comes from interstate for the Tasmania Cup, Gedlee might have to win the Launceston Cup to qualify for a berth in the state’s only Group 1 free-for-all harness event.

The four-year-old’s latest win was effortless.

He was eased out the back from his inside second-row draw by driver Sam Rawnsley and then let loose to race around the field and park at the leader’s wheel.

When Rawnsley slipped his charge an extra bit of rein he burst clear and went on to score by almost five metres from Lugovoi Leis with Billabong Bertie four metres astern.