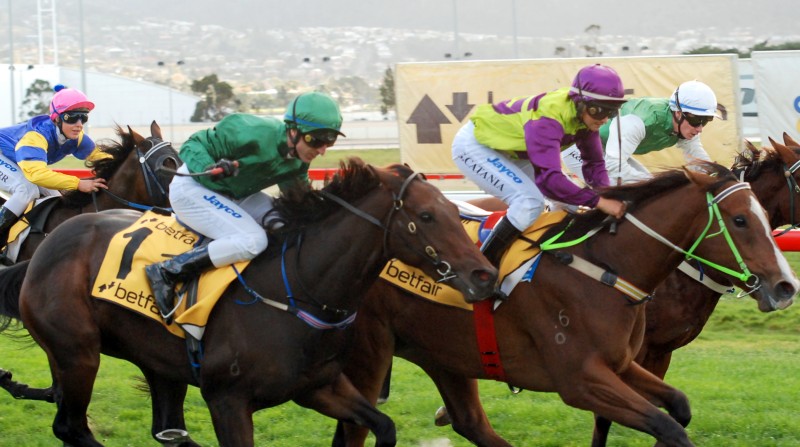 THE combination of trainer John Luttrell and owners Paul and Elizabeth Geard have long been a force with which to be reckoned but at Tattersall’s Park in Hobart on Saturday the partnership simply dominated.

Stable star Geegees Blackflash won the Sorell Cup carrying 63.5 kilograms to mark his return to racing after winning the Launceston Cup in February.

But in the following race their underrated two-year-old Gee Gees Style ended an incredible winning streak by star juvenile Grand Tycoon in the gateway Shopping Centre Autumn 2YO Classic over 1200 metres.

Grand Tycoon went into the race unbeaten from seven previous starts and punters sent him out the $1.40 favourite and after the field had travelled 300 metres those who took the short odds would have been pleased with their investment.

The pair hit the home straight together but Grand Tycoon loomed to stake his claim and looked set to continue on his winning way.

But the Barry Campbell-trained gelding was unable to get to theme like he did at his previous start.

Under strong riding from apprentice Catania, Gee Gees Style proved too strong over the concluding stages to hold on and score by a neck from the gallant Grand Tycoon with Vigilante running the race of his life to hold third and only a nose astern.

“You can’t take anything away from Grand Tycoon because he’s been brilliant this season but my horse has not been far behind him in five runs and today it was his turn to win,” Luttrell said.

“He deserved to win a good race so it’s a nice way to end his season on a winning note,” he said.

Gee Gees Style is by Wordsmith, a sire purchased by the Geards about three years ago and this latest win places him in the top first season sires in Australia.

It is an amazing feat given all of Wordsmith’s progeny are owned by the Geards and race only in Tasmania.

Luttrell said the sire is extraordinary.

“I haven’t had a Wordsmith come to my stable that isn’t above average,” Luttrell said.

“I’ll probably have three by Wordsmith going around in the Sires Produce (1400m in Launceston on May 12) and they will all be hard to beat,” he said.

However, the horse that finished fourth to Gee Gees Style on Saturday, Inner Warrior, did  enough to suggest he could start favourite in the Sires Produce.

Inner Warrior missed the start and was last early and when rider Sigrid Carr finally gained some clear racing room in the home straight the gelding powered home to finish on the heels of the placegetters.