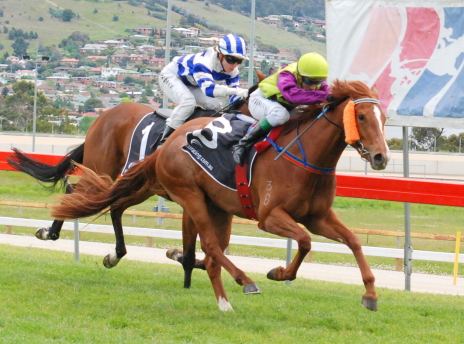 TALENTED three-year-old filly Gee Gee’s La Quita stamped herself as a genuine Thousand Guineas prospect when she powered her way to an impressive win in the Raine & Horne Maiden/Class One Plate over 1550m at Tattersall’s Park in Hobart today.

With three kilogram-claiming apprentice Rasit Yetimova in the saddle the filly trailed the leaders to the home turn and then ran home powerfully to haul in Musique Player to score by 1-1/4 lengths with Ground Control the same margin away third.

Trainer Stuart Gandy was thrilled with the win and confirmed the daughter of Atlantis Prince would chase the feature three-year-old fillies’ races later in the season.

It was Gee Gee’s La Quita was having only her third start to take her tally to two wins and a debut third.

The filly is a half-sister to 2010 Tasmanian Derby winner Geegees Blackflash.