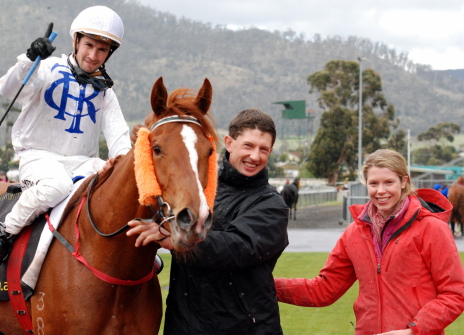 WHILE prominent thoroughbred owners Paul and Elizabeth Geard have been trying to keep a lid on the fact that they own Geegees Blackflash that is favourite for Sunday’s $225,000 Group 3 AAMI Hobart Cup they are also anxious about their three-year-old filly Gee Gee’s La Quita that goes around as favourite for the $100,000 Strutt Stakes.

The prizemoney is not a key factor for the Geards who have poured millions into their thoroughbred breeding and racing enterprise that boasts over 100 horses of which about 35 are in work and spread around the state.

While “The Flash” will be the star attraction at the AAMI Hobart Cup, Gee Gee’s La Quita, that is a half-sister to Geegees Blackflash, will give her owners an enormous thrill is she can emerge triumphant in the Listed fillies’ classic that is a lead-up to the Tasmanian Oaks in Launceston later this month.

Gee Gee’s La Quita stamped herself as a genuine oaks prospect when she led all the way to win the Aceland Thousand Guineas over 1600m in Launceston last Wednesday week.

With veteran NSW jockey Robert Thompson aboard, Gee Gee’s La Quita gave her rivals a galloping lesson in the Thousand Guineas and her trainer Stuart Gandy is excited about her chances of capturing a Listed win before heading to the Tasmanian Oaks.

Gee Gee’s La Quita looked sensational during a trackwork gallop at Brighton on Thursday morning after which Gandy spoke to Tasracing’s Peter Staples.

Listen to what Gandy had to say about Gee Gee’s La Quita .