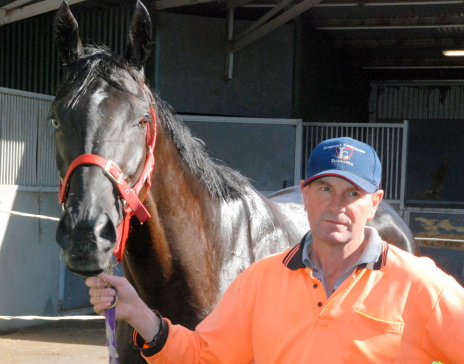 STAR Tasmanian galloper Geegees Blackflash is back in training at Brighton to prepare for a first-up tilt at the Newmarket Handicap.

Trainer John Luttrell said the Clangalang gelding has done a treat during his lengthy spell at owners Paul and Elizabeth Geards’ Broadmarsh property.

Group 3 AAMI Hobart Cup and he ended his campaign with a game second to Prevailing in the Group 3 AAMI Launceston Cup.

Most pundits regard Geegees Blackflash as favourite to win the 2011-12 Horse of the Year Award in a season that boasted many outstanding performances from horses such as Lady Lynette, Rebel Bride, Youthful Jack and Norsqui.

Youthful Jack was trained throughout his Tasmanian campaign by Spreyton-based mentor Adam Trinder who prepared him to win the three major weight-for-age races during the AAMI Tasmanian Summer Racing Carnival.

“He came back into the stable last week and it’s probably the best he has looked returning from any of his previous spells,” Luttrell said.

“He’s put plenty of weight on and I think he’s even grown a bit.”

Geegees Blackflash is one of those horses that enjoy a stable environment and Luttrell said the rising six-year-old walked straight into his box, looked around for a few minutes then strolled to the back corner of his box and nodded off.

“He is such a content horse when he’s at the stable. He really loves it but he is very much a loner.”

“He doesn’t mind being with other horses but he prefers to be left alone.”

“The horse looks magnificent and is a credit to Stuart Gandy and Ruth Wooley who have looked after him at the Geards’ property,” Luttrell said.

When Geegees Blackflash was sent fort a spell after the Launceston Cup his owners suggested it was unlikely the horse would ever race outside of Tasmania.

Luttrell didn’t say that was no longer the case but he did admit he and the Geards would consider “all options” after his first-up run in the Newmarket.

“We’ll just sit down and have a look at what our options are beyond the Newmarket and try and work out what’s going to be best for the horse,” he said.

Geegees Blackflash will carry no more than 60 kilograms in the Newmarket, as it is a quality handicap with a 60kg ceiling and 54kg minimum (weight).

“We have to look at the weight-for-age races for him because he will cop too much weight in handicaps.”

Geegees Blackflash has an imposing record of 11 wins and 12 minor placings from 35 starts for $570,000 in stakes with his two biggest wins coming in the 2010 Tasmanian Derby and this year’s Hobart Cup.

Luttrell said Geegees Blackflash would most likely have at least one trial before tackling the Newmarket in Launceston on November 21.