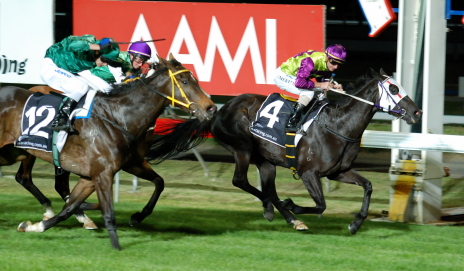 STAR galloper Geegees Blackflash was recognised for his achievements last season by being named Tasmanian Racehorse of the Year.

Geegees Blackflash dominated last season winning five of his six starts that began with the Newmarket Handicap over 1200m followed by three weight-for-age wins ranging from 1400-2100m and he also won the Group 3 AAMI Hobart Cup over 2200 metres before finishing a game second to rising Tasmanian star stayer Prevailing in the Group 3 AAMI Launceston Cup.

The Clangalang gelding took his stake earnings to $570,750 and ended the season with career stats of 11 wins and 12 minor placings from 35 starts

Geegees Blackflash is wined by Paul and Elizabeth Geard who acquired the gelding as part of a package purchase of a mare in foal and with a foal at foot.

Geegees Blackflash was the unborn foal of La Quite that also was named Tasmanian Broodmare of the Year.