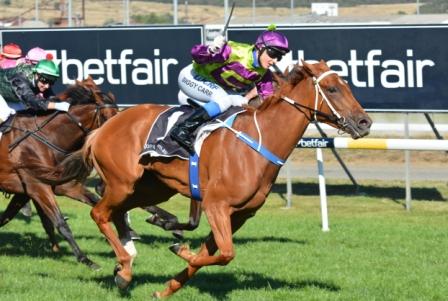 TASMANIAN filly Geegees Goldengirl confirmed her status as the best of her age and sex in the state when she powered home to win the Sues of Invermay Tasmanian Oaks over 2100 metres at The TOTE Racing Centre in Launceston.

With apprentice Siggy Carr in the saddle, Geegees Goldengirl showed good early speed to settle just off the pace but when she began to over race her rider was forced to take hold and she dropped back to sixth.

Savrajette set a slow pace in from but the rider of the Barry Campbell-trained Gwemrae (Damien Thornton) showed some initiative and sent his filly around the field to lead and make sure at least the last half of the race was run at a decent tempo.

When Carr eased Geegees Goldengirl out three-wide to make her run 500m out she quickly ran to the leaders.

While she was exposed in front sooner than connections would had hoped the filly stuck to her task and held out all comers over the concluding stages to score by over a length from Shayana with the judge unable to separate interstate invaders Monopole and Tralee Chorus for third.

Geegees Goldengirl’s trainer Stuart Gandy was elated after the race and described the win as “justified.”

Geegees Goldengirl won the Strutt Stakes in Hobart (2100m) on Hobart Cup day which is the traditional lead-up race to the Oaks but prior to that race Gandy opted to run her in the Hobart Guineas (2100m) against the males instead of tackling the Thousand Guineas (1600m) in which she probably had a mortgage given her form.

Geegees Goldengirl (Wordsmith-La Quita) is owned and was bred by Paul and Elizabeth Geard who have dominated with their horses during the Betfair Tasmanian Summer Racing Carnival.

Listen to what trainer Stuart Gandy and jockey Siggy Carr had to say about Geegees Goldengirl’s Oaks win.