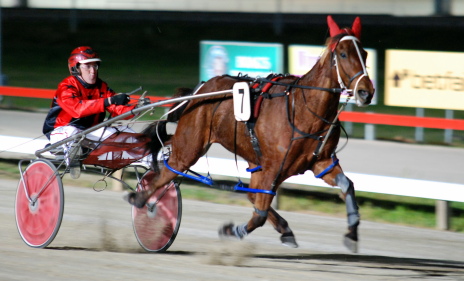 WINNING races by big margins is usually reserved for the superstars of our racing world but every so often a quiet achiever comes along that is an exception to the rule.

Six-year-old pacer Glory Jeasper is one such pacer that left a lasting impression when he won a C0-C1 by over 27 metres at Tattersall’s Park in Hobart last Sunday night.

Glory Jasper (Village Jasper-Chance For Glory) was having his first start in the state for trainer-driver Nathan Ford who had the pocket dynamo settled just worse than midfield and poised to pounce a lap from home.

When Ford eased the gelded son of Village Jasper three-wide to make his run in the back stretch the last time he quickly rounded up the leaders and when Ford let him rip at the top of the straight he bounded clear and won with something in reserve.

It was an awesome exhibition and one that had even his trainer gasping for air.

“He has shown a brilliant turn of foot on the training track but tonight he just exploded away from them when I let him go,” Ford said.