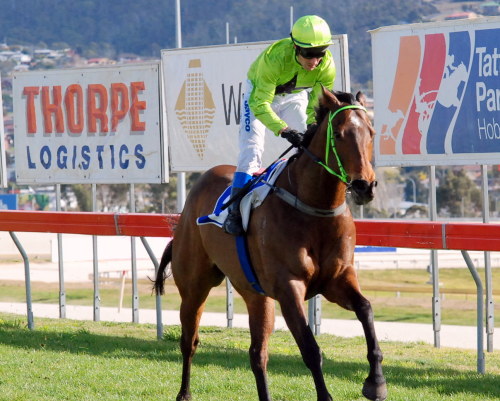 LIGHTLY raced five-year-old Go Riley Go produced one of the best performances on the nine-race card at Tattersall’s Park in Hobart last Sunday.

Go Riley Go was urged forward early by jockey David Pires to make the most of an inside draw and once in front he travelled well to the home turn with his opposition off the bit and chasing hard.

There were no challengers in the run to the line with the Chris Crook-trained gelding scoring untouched by five lengths from Makes Cents with Wills Hope about two lengths away third.

It was a top ride by David Pires who ended the day with a treble. His other winners were Kickboxer and Family Trust

Go Riley Go was having only his fifth start so his trainer explained why the gelding is so lightly raced.

It was an incident behind the barriers last preparation when he was kicked by another horse that resulted in inconsistent performances.

Listen to what trainer Chris Crook had to say – click here .