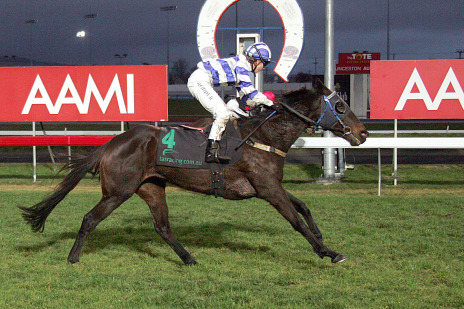 Blustery conditions at The TOTE Racing Centre in Launceston on Sunday provided an interesting challenge for punters with the conditions favouring those on the pace and this is exactly how the George Blacker trained Eden Hills took out the second, The Victoria’s Flowers Maiden over 1400 metres.

Jumping nicely and ridden a treat by Kelvin Sanderson, Eden Hills led all the way to beat Red Willow by a length and a quarter. Watch out for Red Willow from the John Blacker stable, who is certainly knocking on the door.

Former Queensland apprentice Matthew Milford enjoyed his first Tasmanian winner aboard Dangerous Geegee in the F & W Stewart C1 Handicap over 1200 metres. Milford, 23, has joined the Peter Luttrell stable at Longford and was pleased with the six year old’s win. This was Dangerous Geegee’s second win from 29 starts, but trainer John Luttrell is confident that there are more wins to come.

Charlie Goggin was the only trainer to score a double with It’s So Good taking out the TROA Maiden over 1200 metres and Build A Bridge in the last, who continues to impress. A well timed rails run on the home turn found by jockey Tahlia Rodder had the mare challenging former stable mate Tranquil Lass up the straight to win by a long neck. Build A Bridge is a model of consistency winning four out of her five last starts.