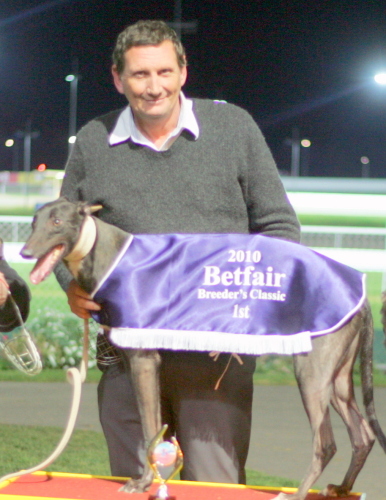 A MASTER plan hatched some time back was realised at Tattersall’s Park in Hobart last week when talented pup Smokin’ Gonzales emerged triumphant in the Betfair Breeder’s Classic final over 461 metres.

Smokin’ Gonzales ($5.80) went into the final on the back of a very impressive semi-final win but the Tony Hoyland-trained dog definitely saved his best for last.

He flew the lids from box six and after a stoush with the favourite Ella Lucy ($2.30) Smokin’ Gonzales gained the upper hand and went on to defeat the favourite by two lengths with Ren Shen ($7.60) five lengths away third and just in advance of her litter sister Dang Shen.

“This is brilliant because I’ve had as many as three runners in a Flying Amy Puppy Classic in Brisbane and got pipped on the post so this is real good,” Hoyland said.

The trainer was asked to rear three from the litter and he bought one, Botox, which also made it into the final.

“I was asked to rear this pup and a couple of others from the litter and they were all athletic types, so I bought the bitch that we named Botox.”

“I told the dogs’ owner Michael Wallworth that if ever he wanted to race the other two in Tassie I’d be only too pleased to take them and that’s what panned out.”

“We eyed this Breeder’s Classic a while back and pretty much set him for the race.”

“I really want to thank Michael (Wallworth) for having the faith in me to prepare this dog for the race series,” he said.

Smokin’ Gonzales had six starts on country tracks in Victoria for a win and one minor placing before heading to Tasmania.

“I trialled him on the Hobart track solo and he went well but he won his qualifying heat in a slow 26.90 but he clocked 26.35 to win his semi so we were quietly confident he’d run a big race provided he jumped with them tonight,” he said.

Smokin’ Gonzales clocked a first split of 5.07 seconds and powered home to stop the clock at 26.18, which would have won an invitation grade race on the night.

Hoyland’s bitch Botox got pole-axed near the top turn and again in the straight so it would pay to forget she ever went around.

Hoyland is an experienced trainer, having earned his stripes in Queensland where he enjoyed much success before relocating in 2008.

He lives at Port Sorrell on the North-West Coast where he has established kennels for up to 10 racing dogs on his and wife’s Nicola’s five-acre property.

Smokin’ Gonzales was flown back to Melbourne last Friday to be prepared for a race at Bendigo on Wednesday.

While Smokin’ Gonzales was impressive, Ella Lucy lost no admirers as she gave her all.