Goodrick has the last laugh 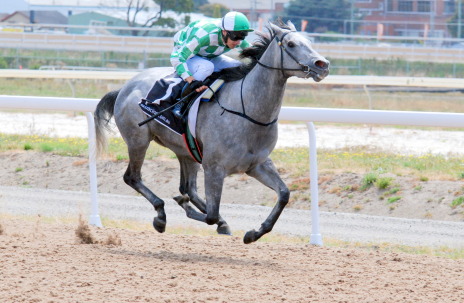 LONGFORD trainer Barry Goodrick had the last laugh when his new stable tenant The Sugar Mouse scored a brilliant win in the Wynyard Couriers 3YO Maiden over 1000 metres a Tapeta Park Spreyton today.

Goodrick purchased The Sugar Mouse on the Internet for $7500 from owners inSouth Australiabut when she arrived at his Longford stables it appeared the filly had issues with her legs and in particular one knee.

He called for a second opinion on the knee issue and ended up being able to resolve the problem by swimming her at the beach in the two weeks leading up to today’s first-up assignment.

“Some members of my family told him there were no swimming races for horses inTasmaniaand laughed at me for thinking she could win races,” Goodrick said.

The Sugar Mouse began well from a wide gate and found the lead and from there on it was a procession.

She hit the line nine lengths clear of Cheerful Gee Gee with Alainn only a long neck away third.

The grey filly had reasonable form from only three starts inSouth Australiabefore being dispatched toTasmania.

.Listen to what trainer Barry Goodrick had to say about The Sugar Mouse and how he came to get her in his stable – click here .