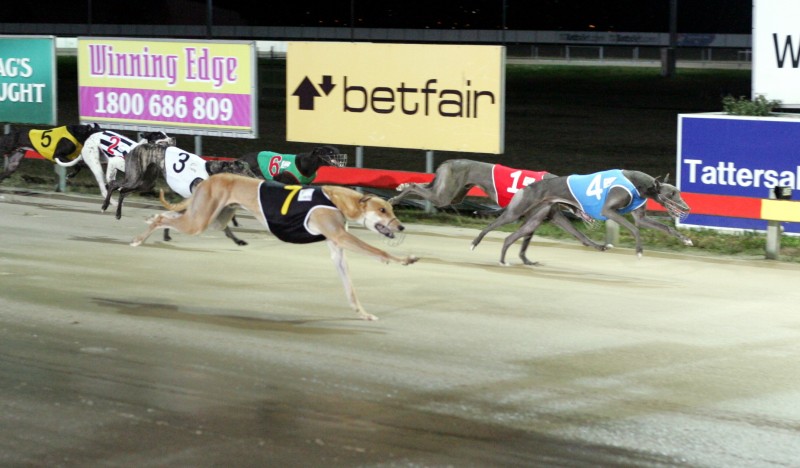 THE finals of the Greyhound Owner, Trainer, Breeders Association Tasmania are the feature races on the 11-event card at Tattersall’s Park in Hobart tonight.

Buckle Up Wes, prepared at Mangalore by Ted Medhurst is unbeaten from his two outings on the Hobart circuit and both times he has broke 26 seconds.

The son of Collision, owned and raced by Robyn Johnson and Sharon Sutton, won wearing the blue vest in his heat last week and he will need to be right on his game if he is to emerge triumphant.

The same applies to She’s All Class that is trained at Longford by David Crosswell.

The Division 1 final (Race 8) has attracted a good field of top grade performers but on exposed form and from the draw it looks a match in three.

Frytson won his heat defeating Shanlyn Poh and from box two the Debbie Cannan-trained dog looms as the likely leader and the one to run down.

However Frytson’s habit of running wide on the home turn and sweeping down the middle of the track could be his downfall in this line-up.

MartelloTowers is drawn well in box eight as this will allow him a clear run to the top turn and with his powerful second split he should be in a winning position turning for home.

Franklyn Bluboy (3) has plenty of early speed and should the Margaret Rossendell-trained blue dog find the front he too will be hard to run down and Gracie must warrant plenty of respect despite starting from box five.

Gracie won from this box two starts back on the Hobart circuit in grade four company so a repeat effort would make her very competitive.

Shanlyn Poh possesses loads of ability but being tardy at the start is always going to make him a risky proposition but should he get a clear run he will be right in at the business end of proceedings.

Hellyeah Missile will wear the black vest tonight but if he flies the lids like he did last week then the others will have a good look at his hind quarters for the last 400 metres of the race.

The Anthony Bullock-trained dog stopped the clock at 26.20 and scored by almost five lengths from Burma Roo that chased hard throughout and looms as a genuine each-way chance from box two.

Hellyeah Missile’s litter sister Hellyeah Jetta has drawn well in box one but will need to be at her best to place based on her unimpeded heat time when third in her heat last week while Mauboy, that ran second to Acting Up in their heat, notched his first win with a game come from behind effort in Launceston last Monday night.

Acting Up showed good speed to lead all the way to win his heat so he must be respected on that effort.

For all the latest form and race by race analysis – CLICK HERE.