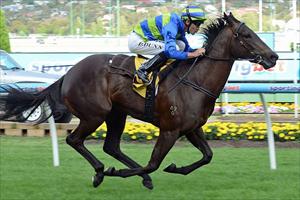 The astute trainer has now turned his attention to snaring the lion’s share of the prizemoney in the $100,000 Listed Gold Sovereign Stakes for two-year-olds over 1200 metres in Launceston today with his promising colt Gracious Prospect.

The colt arrived in Tasmania via the Spirit Of Tasmania yesterday and looked in good order when he was loaded into a float in Devonport for the road trip to Graeme McCulloch’s stables at Whitemore, near Launceston.

Gracious Prospect is well travelled for a two-year-old having already raced in three states.

The colt began his racing career in Victoria and was third in the $200,000 Ballarat Magic Millions and fifth in the $150,000 Maribyrnong Plate at Flemington before heading to NSW where he was very competitive.

He was second to Champagne Cath at Rosehill then sixth in the $200,000 Magic Millions at Wyong.

Hayes then took him to Queensland for the $1.6 million Magic Millions Classic on the Gold Coast in which he was never better than six-wide yet still finished a creditable seventh of 16 and only 4-1/2 lengths from the winner Real Surreal.

“He is a very talented colt capable of winning at the top level in Melbourne but we had this race targeted a while back so we have concentrated on the Gold Sovereign as one of his main goals this time in,” Fennessy said.

“He has done a bit of travelling but so far it hasn’t bothered him but this time he is travelling across the water for the first time.”

“So far he has shown us enough to suggest he will be very hard to beat on Wednesday,” he said.

Gracious Prospect goes up against Tasmania’s unbeaten two-year-old in Grand Tycoon that has taken all before him this season.

The Barry Campbell-trained Written Tycoon gelding is unbeaten from five starts with his wins including The Alfa Bowl in Launceston and the $100,000 Listed Elwick Stakes over 1100m in Hobart on February 3.

Grand Tycoon has drawn ideally in barrier four while Gracious Prospect definitely found the visitor’s draw with barrier 11 and second from the outside.

Others with place hopes include Geegees Velvet and Inner Warrior.