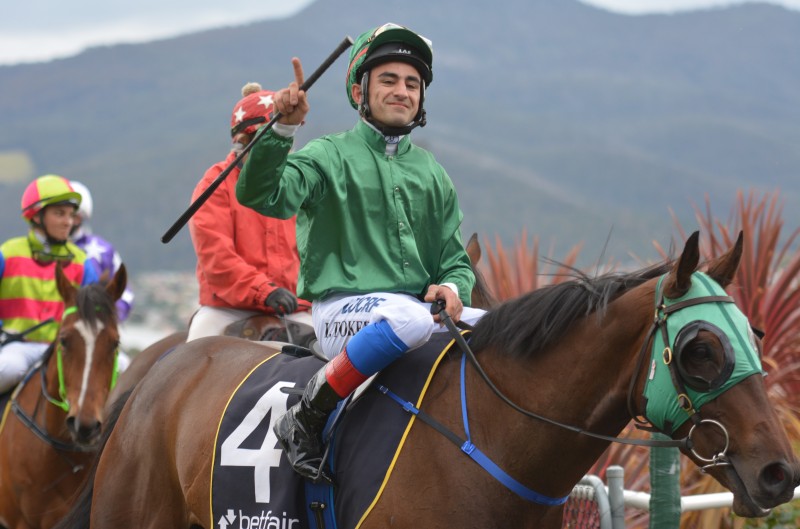 TRAINER Barry Campbell described his talented sprinter Grand Tycoon as a  “marvel” following his impressive first-up win against top opposition in the Winzenberg Trophy over 1100 metres at Tattersall’s Park in Hobart on Friday.

It was an awesome display but not unexpected according to his trainer with the victory taking the Written Tycoon gelding’s career win tally to 11 from only 15 stats for prizemoney of almost $300,000.

Grand Tycoon was Tasmania’s best two-year-old and he also excelled the following season but had to have an operation to remove bone chips from his knee which stalled his three-year-old campaign.

He pulled up lame after winning an open handicap in February at his last start before having the bone chips removed.

Campbell sent his gallant four-year-old to the trials three times before his first-up assignment because he was very burly in condition and after winning the Winzenberg Campbell said the gelding still had to lose some weight.

“He is still a bit tubby and needs to tighten up a lot so to do what he did today tells us what a great horse he is,” Campbell said.

Grand Tycoon is heading towards the Tatts.com Stakes, a weight-for-age race over 1200 metres under lights in Launceston on January 21.

“I have to get another run into him before the Tatts.com Stakes and I’m not keen to run him on Devonport Cup day so I will have to have a good look at the calendar over the next couple of days,” Campbell said.

“I have had a lot of very good horses in my time and Grand Tycoon will always be one of my favourites because he tries so hard every time he goes around.”

“Craig Newitt rode him to win in Launceston one time and he told me after the race that the horse was actually grunting as he was trying so hard to win,” he said.

Grand Tycoon was ridden by stable apprentice Ismail Toker who found it difficult to keep the smile off his face after the race.

“This horse did it so easy it was an amazing win,” Toker said.

Campbell also had Arenzano in the Winzenberg and she led the field to well into the home straight before fading to finish fourth.

“Arenzano has done a good job and she finished ahead of all but one of the mares in the race so we can go to the good mares races during the carnival (Bow Mistress and Vamos) with a bit of confidence,” he said.

Campbell ended the meeting with a double having won the opening race, a 3YO maiden, with the well bred colt Lampo (Astronomer Royal-Pearl of Thunder) that is owned by Barry and Enid Larter in partnership with their son David Larter.

Lampo was having his fifth start and it was his second run back from a spell.