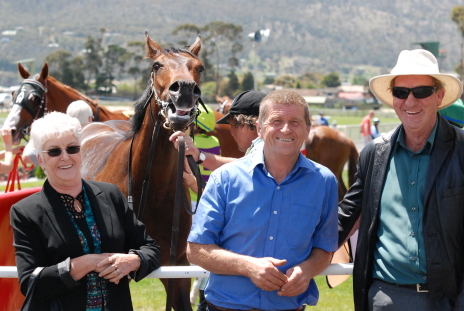 PROMISING two-year-old Grand Tycoon remains undefeated from two starts after scoring a narrow but game win in the George the Trendsetter Tasbonus 2YO Handicap over 900 metres at Tattersall’s Park in Hobart today.

The Barry Campbell-trained youngster settled just off the speed and jockey Brendon McCoull waited until entering the home straight before calling on his charge to extend.

Grand Tycoon hugged the rail in the home straight and had to stave off a determined challenge from Geegees Red Rock over the final 200 metres.

The pair hit the line in sync but the judge’s photo showed a nose advantage in favour of Campbell’s gelded son of Written Tycoon.

Grand Tycoon debuted with an emphatic win in the first two-year-old race of the season in Hobart three weeks ago and Campbell is confident his gelding can retain his unbeaten status when he tackles his next assignment in the Alexandra Plate over 1000 metres next month.

“He’s done a good job under those circumstances but he’ll meet them all at set weights next time and that will make a big difference,” he said.

Grand Tycoon is owned and raced by Charlie and Wendy Langmaid who have enjoyed a lot of success with young horses in recent years including Socks that was named Tasmanian 2YO of the year three seasons back and he followed by the next season by being named 3YO of the year.