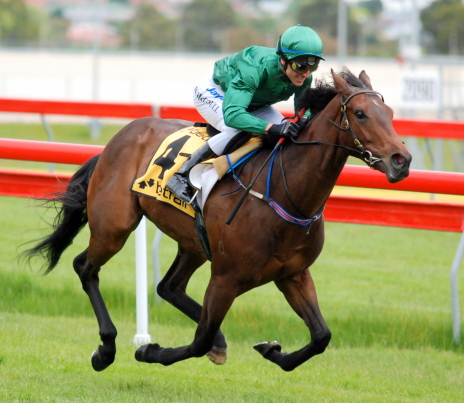 PROMINENT North-West Coast thoroughbred owners Charlie and Wendy Langmaid look to have another rising star following the win of their two-year-old Grand Tycoon in the first two-year-old race of the season at Tattersall’s Park in Hobart today.

With top jockey Brendon McCoull aboard Grand Tycoon showed brilliant early speed from a wide gate to land in the lead and then travelled comfortably top the home turn.

When McCoull called on the gelded son of Written Tycoon to extend in the home straight he found another gear and raced away to score an effortless win from Inner Warrior (God’s Own-El Milagro) with Gee Gees Prairie (Teofilo-La Prairie) a closing third.

Trainer Barry Campbell was delighted with the win.

“He’s only small but he is a professional and he showed that today,” Campbell said.

In winning the race, connections also earned a $5000 Magic Millions bonus and a $6000 Tasbonus incentive that when combined gives the Langmaids $11,000 to spend at the 2013 Tasmanian Magic Millions Yearling Sale in Launceston in February.