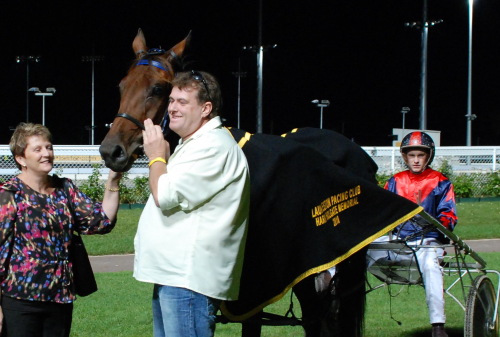 QUALITY FOUR-YEAR-OLD MARE Step Up And Play signalled her arrival as a genuine Granny Smith chance when she powered her way to an effortless win in the Harry Holgate Memorial final in Launceston on Sunday night.

Step Up And Play has been a model of consistency this preparation and will take top form into her main assignment at Devonport on April 25.

The Tony Petersen-trained mare won her heat of the Holgate after finishing a luckless second in Hobart to Boozy Rouge in a strong C1 and that followed a first-up win in Hobart.

“This mare has done everything we’ve asked of her this preparation and tonight she was simply awesome,” Petersen said.

“We’ve had the Granny Smith ($20,000 4YO Mares feature) on the radar for some time and that’s where she’s headed, probably with one more run under her belt,” the trainer said.

The mare was driven by in-form reinsman Mark Yole who described the win as “first class”.

“She settled near the rear from her outside back row draw and I was content to sit there and wait until the 500m before making our move,” Yole said.

“When I eased her out she just grabbed the bit and had the leaders covered quickly and she actually switched off when she hit the front.”

“I had a couple of gears left so I have to say it was an awesome run,” he said.

Listen to what part-owner Jamie Cockshutt had to say about Step Up And Play’s latest win – click here .