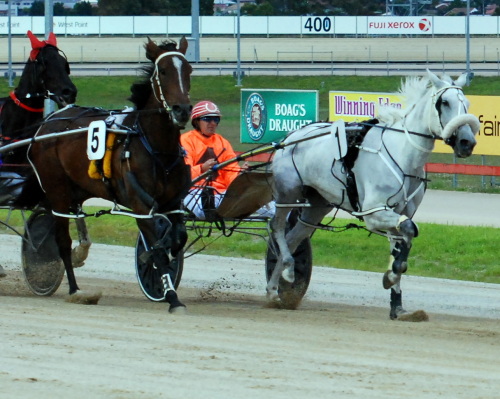 EXPERIENCED harness trainer Roger Brown is hoping his talented grey mare Flyin Indy Air can mirror her last start effort in Hobart and make it back-to-back wins in the Betfair Stakes over 2200 metres at The TOTE Racing Centre in Launceston on Sunday night.

Flyin Indy Air scored an impressive win at Tattersall’s Park last Sunday week where she powered home to defeat Levina Leis and Koizora in a 4YO and older mares race over 2095 metres.

It was her first win since she saluted at Geelong in Victoria in May 2009 when in the care of David and Lisa Miles.

The mare is owned by David Miles’ parents who opted to send the mare to Tasmania to try and resurrect her career.

Leading up to her win two weeks ago she had notched seven minor placings and a fourth from the eight runs leading up to the win.

The mare has drawn barrier 10 on the second line but meets similar opposition than what she encountered last time out.

Listen to what trainer Roger Brown had to say about Flyin Indy Air’s chances in Launceston on Sunday night – click here.