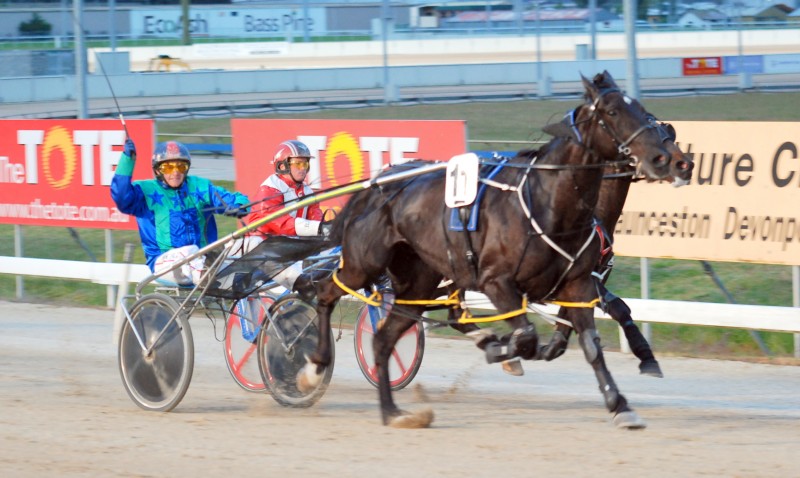 GREYSTEEL made up for luckless results in a couple of recent feature races with a game win in the Golden Mile in Launceston on Sunday night.

Punters were unforgiving and sent him around a despised $35 outsider but despite facing the breeze for most of the race the Zeke Slater-trained gelding outgunned his rivals in a slogging finish to emerge triumphant over race leader Tony Macarony with veteran Our Sir Jeckyl a close-up third.

Greysteel made his way into Slater’s stable last year and he had immediate success winning the Launceston Mile and the City of Launceston Cup.

While his form waned and had only modest form going into last Sunday night’s race Slater believes he definitely didn’t deserve to be at such long odds.

“His recent form was deceptive because his form wasn’t as bad as it looked on paper because he hadn’t been getting a lot of luck,” Slater said.

“He was suited by the distance of this race because he is a dead-set miler,” he said.

Greysteel was very disappointing in the Easter Cup but driver Ricky Duggan said he ruined any winning chance by pulling too hard early and midrace.

“He went mad in that race but he settled better tonight and, even though I was in the death, I wasn’t worried,” Duggan said.

It was a keen and open betting race with Tony Macarony firming to start the $3.50 favourite while Our Sir Jeckyl was sent out a $10.70 chance.

Those who stayed loyal to Greysteel were handsomely rewarded with a $35.60 win dividend and $6 the place but the trifecta on Tattsbet paid $514.

Greysteel is owned by Merv Butterworth who sent the gelding to Slater last year as a replacement for star mare Queen of Fire that was returned to Butterworth’s property in Victoria where she is expected to embark on a stud career at the end of this season.