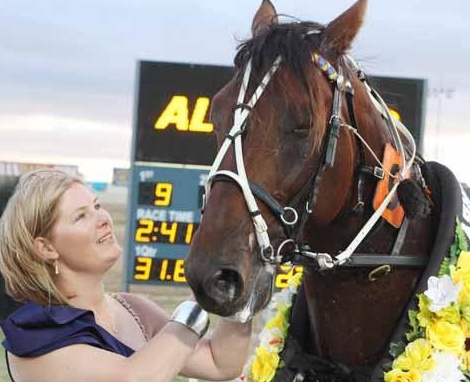 THE harness racing spotlight shines on Tattersall’s Park in Hobart today with the $40,000 Smithawards Tasmania Cup (R6) and the $20,000 Relish Catering George Johnson (R7) the two feature races on the strong nine-event card.

Both feature races have attracted good fields with 10 acceptors in each and Melton (Victoria) trainer Amanda Grieve could train the double with Im Corzin Terror (9) in the Tasmania Cup and Tandias Bromac (10) in the George Johnson.

While Im Corzin Terror represents the class factor, the Tasmania Cup is a race with plenty of depth.

Star Chamber (1) and Blue Pointer (2) have been exceptional at Launceston in recent weeks while Motu Crusader (6) is attempting to win his third successive Tasmania Cup.

Outback Mach (5) and Riverboat Jasper (4) were close up in track record time at Launceston last Sunday so they must be considered each-way hopes.

Grieve will be hoping for better luck this year in the Tasmania Cup after Im Corzin Terror did a power of work last year before just failing to hold off Motu Crusader.

Im Corzin Terror is the sole interstate representative in the Tasmania Cup.

Tandias Bromac has won five metro class races at Melton over the last five months and may be too classy for her rivals in the George Johnson.

The other interstate representatives are My Hayley Robin (6) and Whisper Jet (9).

My Hayley Robyn is a 7YO mare that hasn’t raced since winning three metropolitan races at Albion Park in October 2013. Now with Brighton trainer Nathan Ford, the mare was an impressive trial winner at Hobart on Wednesday night.

Whisper Jet is a 5YO ex New Zealand mare that has won three of her nine starts this season for Great Western (Victoria) trainer Kerryn Manning.

At her last start on 29 November at Melton, Whisper Jet finished eight metres from the winner, The Good Times, in the $20,000 Melton Mares Championship.