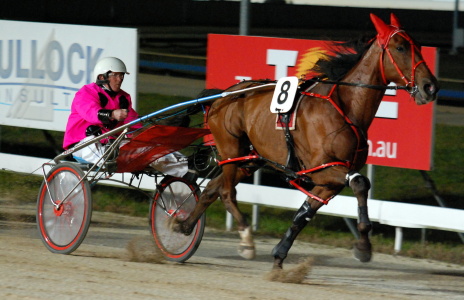 SOUTH AUSTRALIAN five-year-old Grizz Wyllie gave his rivals a pacing lesson when he led most of the way to take out the 2012 $40,000 Sunrise Bakery Easter Cup over 2698 metres in Launceston tonight.

It was a brilliant win by the Joe Buttigieg-trained gelding that has been domiciled in Tasmania for over a month preparing for the race in the care of Craig Toulmin.

It was a pick-up drive for veteran reinsman Paul Hill, who was only confirmed as the driver on the morning of the race.

It was an ideal partnership as Grizz Wylie was a proven non-performer in standing start races but Hill’s expertise and ability to get horses to step away and his guile on front-runners proved an unbeatable combination and a race-winning move by Toulmin who was given the responsibility for booking the driver.

Touchwood Bucksta (Simon Ford) stepped well and led from the pole position but when Grizz Wylie ($10) also stepped well Hill opted to push on and try and find the lead.

Much to his surprise Ford was content to hand up the lead without Hill having to apply any pressure to his horse.

Once in front Hill rated Grizz Wyllie superbly and 700 metres out he called on his charge to sprint and he quickly put a dozen metres on his rivals.

The race favourite Queen Of Fire led the three-wide brigade with the second favourite Our Sir Jeckyl on her back.

But the favoured runners struggled to make an impact and it was left to the lesser lights Empty Envelope and the emergency Land Of Panaarm to try and bridge the gap in the home straight.

But try as they did it was to no avail with the New Zealand-bred Grizz Wyllie (Christian Cullen-Lady Alex) hitting the line almost six metres clear of Empty Envelope with Land Of Panaarm just over four metres away third.

Toulmin said Grizz Wyllie would remain in Tasmania and contest a couple more free-for-alls but would most likely be a part of a team to tackle some races at Menangle in h coming months.

Listen to what driver Paul Hill had to say about winning the Easter Cup – click here.