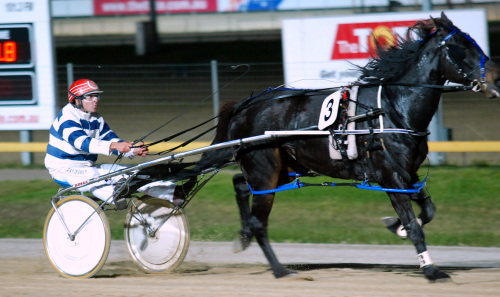 UNDERRATED four-year-old pacer Guerrero notched his first win in almost a year when he easily accounted for a field of C0 performers in Hobart last Sunday night.

Guerrero, prepared at Lachlan by Chris Hodge, had not won since June last year but if the gelding can mirror this latest effort at his next outing in C1 company he should be very competitive.

The gelding burst clear of his rivals on the home turn and went on to score by 14 metres from The Innkeeper with Chelsea Dear over two metres astern.

It was only his second start this season and followed an encouraging first-up third in Hobart behind Black Flyer in early January.

“We had him set to resume from a break at New Norfolk but he injured himself so we had to put him out and start again,” Hodge said.

Guerrero (Topnotcher-Cashalter Bay) showed ability from day one with impressive win on debut in a 2YO race over 1609 metres.

At one stage Hodge thought he might have one to replace his former stable star Ticket To Cash that was one of the best of his time.

Guerrero was bred by Hodge and his racing partners Dennis Bone and Mark Cashion, who owns the broodmare (Cashalter Bay).

Listen to what trainer Chris Hodge had to say about Guerrero’s performance in Hobart last Sunday night – click here .