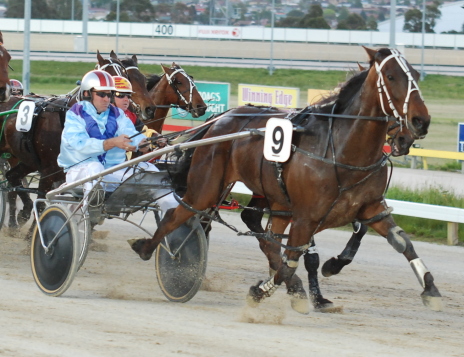 After scoring a game win at his first Tasmanian outing in Launceston a week earlier the seven-year-old produced a game performance to emerge triumphant in a C2-C3 race over 1609 metres at Tattersall’s Park in Hobart.

Guvnor (Village Jasper-Can Y Glaw) was tried in Victoria where he won four and placed eight times from 34 starts but in recent times the gelding has been struggling to make the grade but he appears to have found a new lease on life in the care of Petersen.

Guvnor’s win in Launceston was impressive but this latest effort clearly stamped him as a horse to follow at his next few starts.

In-form reinsman Troy Hillier was impressed with Guvnor’s latest effort, in particular the gelding’s turn of foot when asked for the supreme effort in the home straight.

Petersen was not getting carried away with the win but admitted there was some scope but preferred to take it “one race at a time”.

Guvnor gave Petersen his seventh win in succession which is quite a feat given he has only a small team of five in work at his Mangalore training complex, about 35 kilometres north of Hobart.

Listen to what trainer Tony Petersen had to say about Guvnor’s latest win – click here.