Half sister to Blacks A Fake at Burnie on Friday night 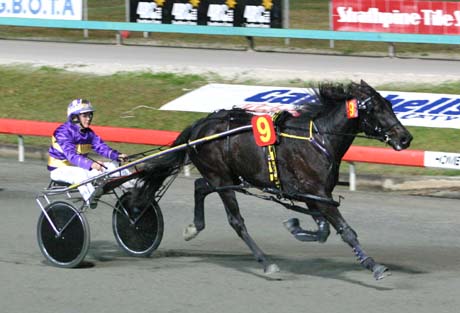 It’s rare to see nine races at a Burnie meeting but that’s what patrons will be presented with at the popular North West Coast venue on Friday night. The main race is the BP Liza Storm (Race 4) which has attracted four two year olds and one, Goinsenial (N1) has a lot to live up to.

The Bettors Delight – Colada Hanover filly was purchased for $20,000 by Barrie Rattray at last years APG sale in Sydney. She is a half sister to Blacks A Fake – a legend in Australasian harness racing. Blacks A Fake holds the record of the most Inter Dominion wins.

The first of his four victories in Australasia’s greatest race was in Hobart in 2006. The other three were in 2007 (Globe Derby), 2008 (Moonee Valley) and 2010 (Menangle). Blacks A Fake was an unlucky second at the Gold Coast in 2009. Blacks A Fake led and after being attacked throughout by Auckland Reactor, Mr Feelgood collared him late with the winning margin being a half neck.

Goinsenial did her qualifying trials late last year and was second to Tisu Bombbelle at Carrick on 20 December.

Apart from Goinsenial, three others are making their racetrack debut and all were successful at the Burnie trials on Monday night. Latrobe trainer Brett Jaffray has two superbly bred first starters in the Ian Heazlett Memorial (Race 3). Netherby Road (N1) is a 3YO filly by Jet Laag out of Tingara. Tingara was trained and driven by Shelley Barnes and three of her 14 wins were at Moonee Valley. Netherby Road defeated Esquivo and Last Guy Standing at the Burnie trials on Monday night.

The other Jaffray debutante is Mi Makarova (R3 N10). She is a 3YO filly by Dawn Ofa New Day out of Mi Mademoiselle. Mi Mademoiselle won five races and is a daughter of Milady, one of Australia’s best race mares of her era. Mi Makarova beat Devil Of Tyne and The Moonshiner at the trials on Monday night and her time was three seconds quicker than Netherby Road.

Stowport trainer/driver Craig Hayes has Bazzas Village (R4 N3) in the BP Liza Storm Pace. The 2YO gelding, by Sutter Hanover out of Pasadena Village, is the first foal from an unraced Village Jasper mare. At the trials on Monday night, Bazzas Village narrowly defeated Master Sam with a long distance back to Emjays Alfie.