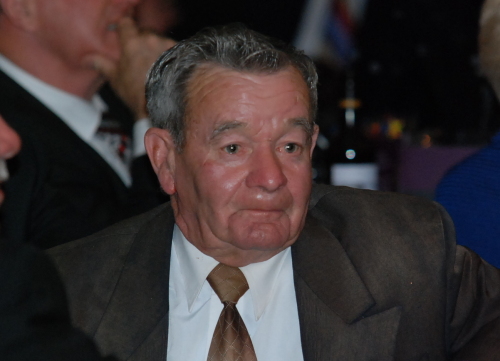 THE Tasmanian Racing Hall of Fame inductions were again the highlight of the annual thoroughbred racing awards held at Tattersall’s Park in Hobart last Friday night.

While the winners of the horse of the year and top two and three-year-old titles and the breeding awards were well received by the 300 who attended the gala function, it was the emotion that surrounded the hall of fame inductions that had the crowd spellbound.

Veteran trainer Walter McShane walked to the stage to a standing ovation and his response to being inducted was emotional and heartfelt.

His major feats, spanning 50 years, were rolled into a two-minute video presentation after which he delivered a response that was typically modest but entertaining.

It was a similar response when 92-year-old Jim Osborne was inducted for his commitment to the industry as an amateur rider, owner and club administrator.

Osborne almost single handedly raised the $140,000 to rebuild the Longford racetrack grandstand that was destroyed by fire.

But the induction that captured the imagination of everyone at the function was that of Max “Macka” Harris who joined the elite club as an associate.

Harris was genuinely stunned when his name was announced and it took him some time to gain his composure when being interviewed by event host Colin McNiff.

Harris’ foray into racing came as an 18-year-old who relocated from Victoria to Hobart to embark on a riding career as a jumps jockey.

He was 20 when he rode in his first race and while he rode many winners during a career in the saddle that lasted 13 years, his fondest memories was winning six jumps races aboard Buxton that won six from seven starts.

He also had much success on the flat. He was leading in the race for the 1962-63 jockeys’ premiership until a fall ended his chances of winning.

It was that fall in 1963 which ended his riding career but his love affair with racing continued.

He tried his hand at training and from the mid 1960s until 1989 he worked for the Tasmanian Racing Club in various roles including clerk of the course, starter and assistant ranger on race days.

“This is without a doubt the highlight of my career in racing,” Harris said.

“To be inducted into the Hall of Fame is something everyone who has given their life to the sport would want and for it to be given to me is quite amazing,” he said.

Harris remains involved in the industry as a race day steward at southern meetings and he is the permanent track steward at the Brighton Training Complex.

To cap the night, former top trainer and inaugural Hall of Fame inductee Len Dixon was elevated to Legend status.