Hall upbeat about her three runners on Sunday 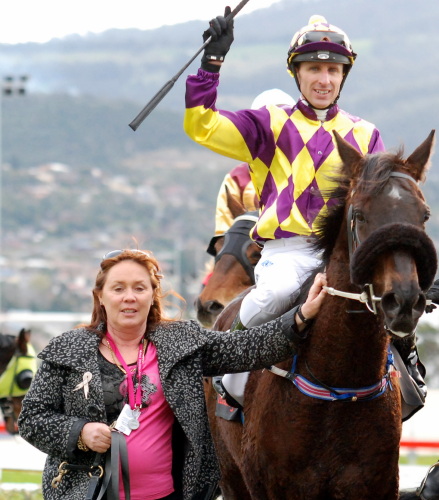 CAMPANIA trainer Rhonda Hall will saddle up three of her stable tenants at Tattersall’s Park on Sunday and all appear to have strong chances of winning.

Hall has long had a good opinion of her four-year-old Rutherglen Rhul and he hasn’t let her down this preparation with the gelding unbeaten from his two starts.

Rutherglen Rhul scored an impressive all the way win first-up from a spell in a class two handicap over 1400 metres and he followed up with another outstanding performance to win over the same trip in a strong class four.

This is by far his biggest test but the gelded son of El Maggiore has matured into an outstanding galloper and could be headed for a tilt at the Devonport Cup if he performs as Hall expects on Sunday.

Rutherglen Rhul goers around in race nine, the last race of the day, a BM78 over 1600 metres.

Illusion Of Magic (race 2) is a lightly raced five-year-old that has had only two starts and it was his last start effort two weeks ago when second to Tough Midori in a maiden over 1100 metres that suggested he might have a future.

Mugging (Street Cry-Robelee) won over 1400 metres two starts back and wasn’t far away at his most recent outing so Hall expects the well bred six-year-old to make an impact at the business end of proceedings on Sunday.

Mugging will line up in the class two handicap (race 8) that boasts handy opposition.

Listen to what trainer Rhonda Hall had to say about her three runners at Tattersall’s Park on Sunday – click here .