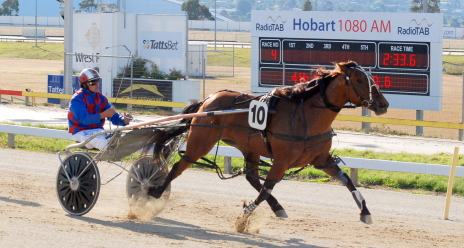 Veteran harness racing trainer David Hall doesn’t have many horses in work at any one time so winning a feature race is something of a rarity for the likable horseman from Longford inTasmania’s north.

Elsudoku made her way into the final courtesy of an eye-catching second to Clonmacnoise in their heat two weeks ago but despite the good form punters sent her out one of the rank outsiders at $67.

However, it was the mare’s first win since August last year.

It was a masterful drive by Ricky Duggan who had the four-year-old settles midfield but when the pace slackened slightly he sent her up three-wide to make her charge and she gradually crept her way to the race.

The heavily backed favourite Franco Taima ($1.60) looked to be cruising in the lead 500 metres out but when Duggan sent Elsudoku up to challenge at the top of the home straight the favourite started to flounder.

Elsudoku hit the front and she then staved off late challenges from All About Bailey and Guerrero with Franco Taima fading to fourth.