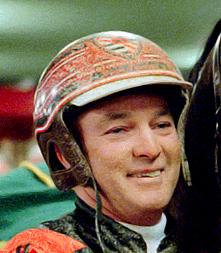 MULTI Inter Dominion-winning trainer Brian Hancock is confident he has the right horses to plunder two of Tasmania’s most prestigious harness events.

Hancock is expected to arrive in Tasmania today (Wednesday) with his underrated free-for-aller Vegas Bound and lightly raced mare Divine Rena, both of which have the credentials to be very competitive at the top level.

Vegas Bound will tackle the Launceston Pacing Cup at Mowbray on Sunday night but his main goal is the $100,000 Group 1 Tasmania Cup at Tattersall’s Park on Boxing Day night.

Divine Rena has been nominated for a race in Launceston but her main target is the $50,000 George Johnson in Hobart on Boxing Day.

Divine Rena, a winner of four from seven starts, is a half-sister to BonavistaBay that was one of the nation’s best three-year-olds two seasons back.

Hancock says Vegas Bound is a nice type and a horse on the way up.

“I’ve been very pleased with how Vegas Bound has progressed this time in and his last start third to Washakie and Black’s A Fake in the Treuer Memorial at Bankstown two weeks ago was a top effort,” Hancock said.

“But he’s done some amazing things elsewhere including going 1m.52.5s (mile rate) at Menangle recently so he’s a fair horse,” he said.

Hancock is very keen to get Vegas Bound to the Tasmania Cup because this year the race reverts back to a mobile start with a preferential barrier draw based on prize money earned.

“My horse has earned about $130,000 so he’ll most likely get a front row draw, although that depends on what else comes for the race from interstate,” he said.

Hancock has enjoyed a lot of success in Tasmania, including an Inter Dominion title with his former champion Our Sir Vancelot.

He also has had a great affinity with the mares feature the George Johnson, having won it with Elite Rena, the dam of Vegas Bound.

“It was quite sad to lose Elite Rena because she has been such a great producing mare and she was a lovely horse to have around the place.”

“She was 18 but still had a lot of life in her and she was tested positive in foal to Somebeachsomewhere,” he said.

Hancock is quietly confident Vegas Bound can be very competitive in Tasmania, especially if he can produce the form that gave him a mile rate of 1m.52.5s at Menangle three starts.

That night he powered his way to a seven-metre win over the highly promising Beef City Beau from the Luke McCarthy stable, producing first and last quarters of 27.7s and 27.5s respectively.

Hancock said he will stable his horses with Henry Pullen at Brighton, which is a step in the right direction given Pullen has accommodated the past three winners of the Tasmania Cup.

The Tasmania Cup will be run over 2579 metres with a maximum of 12 starters and this year’s line up could be better than most years in that recent Miracle Mile winner Smokin Up is expected to line up.