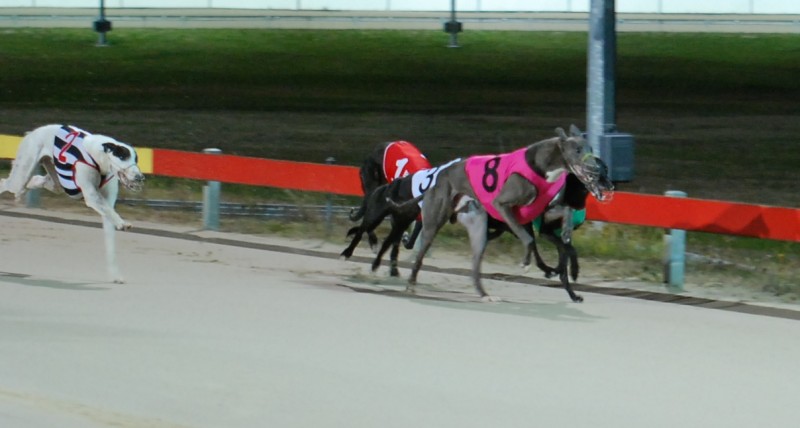 HAPPY TIGER staked his claim on a berth in the Vet’s Medley Series final with an impressive win in an opening round heat over 599 metres at Tattersall’s Park in Hobart last night (Thursday).

The Vet’s Medley Series is run over two rounds of heats and over varying distances.

The first round is run over 599 metres and the second and deciding round over 461 metres on the Hobart U-bend circuit.

The final field is determined on a point score basis with points allocated to finishing positions in each of the two rounds.

The winner of each heat earns 11 points with eight for second and six for third.

Fourth earns four points and that reduces by one through to last place which earns 0 points.

Happy Tiger has been racing in stellar form with this latest win his second in the space of three days having scored impressively at Devonport last Tuesday week.

“The dog is racing extra well and I was very confident he would win tonight,” Pursell said.

“”His win at Devonport last Tuesday was terrific and he just needed to get a bit of luck early tonight and that’s how it panned  out.,” he said.

Happy Tiger ($2.30fav) began well from box four and had the rail behind the leader Terror Time ($4.20) by the time they reached the 461-metre boxes with Son Of Superman (5) joining in to stake his claim.

Happy Tiger burrowed up along the rail to have the lead at the top turn and swung into the home straight with a handy break.

He went on to score convincingly from Terror Time with Buckle Up Chalky getting home well to grab third ahead of Son Of Superman.

Lashing Jake returned to winning form after a string of minor placings when he won his Medley heat.

The Allan Anderson-trained dog began well from box eight and settled third but he joined the leaders at the top turn.

But just as he looked set to forge clear he dropped back and had to come again in the home straight to win narrowly from Classic Delta and Spyware.

The favourite China Lady ran into the back of the pack three times twice in the run and should have won by panels.

Gracie earned maximum points when she scored by about four lengths in her heat.

The Donna Goodluck-trained bitch began well from box one and trailed the leader Bub’s Chance to the top turn where she took over and raced away to score impressively from Hellyeah Trish that came from last on the turn with Bub’s Chance a close-up third.

Graeme Moate’s talented dog Shanlyn Johnno was impressive in wining his heat in a time of 34.69.

Shanlyn Johnno ($2.40 fav) began sluggishly from box six and was at the rear when they hit the first turn but he quickly mustered speed and dashed around the field to be three-wide and trying to cross at the 340-metre boxes.

But within a blink of any eye he put three lengths on his rivals and led clearly into the home straight and went on to score by five lengths.

Regal Solo won his heat with a powerful finishing burst to score from Camdale Buddy and bandit’s Revenge in a time of 34.84.

The final heat was taken out by Ruby May that flew the lids from box one and after a duel with Georgius to the half-way mark she gained the upper hand and went ton to score an emphatic win over Larkhill Man with Buckle Up Kade a close-up third.

The second round of heats will be run over 461 metres in Hobart next Thursday night with the top eight point scorers from both sets of heats to progress to the final on May 16.