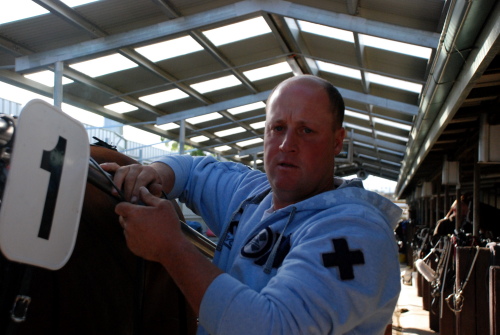 BRIGHTON trainer Phillip Ford has the state trainer’s premiership well and truly in his keeping and one of the keys to his success has been the capability to rejuvenate horses that have been flagged as has-beens in other jurisdictions.

One such horse by the name of Harbhajan (Vestalba Rainbow-Remembrance) delivered the goods at his first start for the Ford stable in Hobart tonight (Wednesday).

Harbhajan had not won in just over four years but with the trainer’s brother Scott Ford in the sulky the eight-year-old gelding gave his rivals a pacing lesson as he strolled to an impressive win over Moira Kite and race leader Fantasy Rocks.

The gelding’s career has been speckled with a dozen minor placings and only three wins from 70 previous starts, all of which were on provincial tracks in Victoria.

But his Tasmanian debut belied that previous form as he came from the rear of the field with a lap to go to park three-w-de in the back straight.

When Ford released the breaks the gelding charged to the leaders and in one fell swoop put the end result beyond doubt.