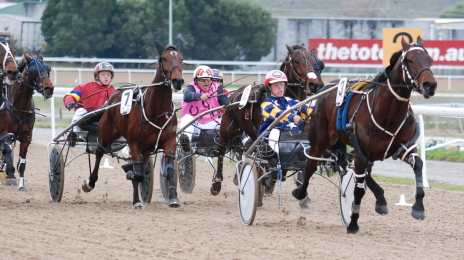 The Devonport Harness Racing Club (DHRC) will host four meetings on the all-weather, synthetic at Tapeta Park Spreyton during the 2012/13 season.

The meetings will be held on Wednesday afternoon 14 November 2012, Sunday twilight 27 January 2013, Wednesday 22 May and Wednesday 31 July.

Tasracing chief executive officer Eliot Forbes said the meetings had been transferred to Tapeta Park from the Devonport Showgrounds in consultation with the DHRC and the Devonport Racing Club.

“This is an excellent outcome for the harness code and the Tapeta Park track that was completed towards the end of 2011,” he said.

The first harness meeting was held at Tapeta Park in July this year after five harness trials and ongoing training sessions on the Spreyton track. The possibility of using the venue for harness activities had been explored by Tasracing at the request of industry participants.

Dr Forbes said the reaction from the Tasmanian harness community to this first harness meeting was overwhelmingly positive.

“There was also significant interest shown in the product from wagering customers,” he said.

Dr Forbes said the track did not require special preparation work for a harness meeting.

“We have consulted with thoroughbred trainers and riders since day one and all agree that harness activity at the track has had no impact,” he said.

Eight races have been programmed for the first meeting on 14 November. A minimum 75 horses are expected to race at the meeting.