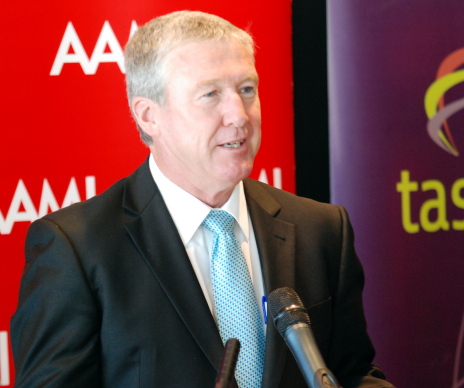 Tapeta Park at Spreyton will host an Australian harness racing first next week.

Mr Green said the Devonport Harness Racing Club will conduct a meeting at Tapeta Park, believed to be the first held on a thoroughbred synthetic track anywhere in Australia.

“A harness meeting at the all-weather track is a great innovation for racing on theNorth-West Coast,” Mr Green said.

Mr Green said the meeting had been approved by Racing Services Tasmania after five harness trials and ongoing training sessions at the Spreyton track.

“The new $11.5 million track was completed in September last year and it’s been a great success.”

The project was undertaken as part of the State Government’s $40 million infrastructure fund for capital works in the racing industry.

“The new track is a significant investment in the future of racing in Tasmania and I’m pleased to see it being used by another code. The harness racing industry was keen to have the opportunity to race here.”

“A number of factors had to be taken into consideration, including any impact on the track itself.”

“Thoroughbred trainers and riders are regularly consulted by Tasracing regarding harness activities at Tapeta Park and all agree there has been no impact.”

Mr Green said the track did not require special preparation work for a harness meeting.

Six races have been programmed for next Wednesdays’ meeting – five from a mobile start and one from a standing start.