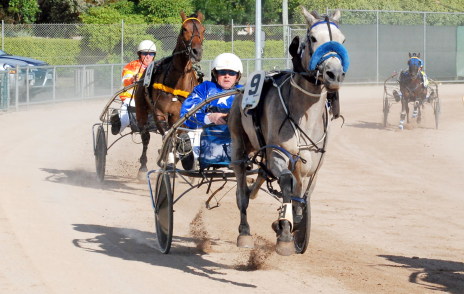 CRAIG HAYES may have been the oldest competitor in the BOTRA Novice Driver’s Series but he also emerged as the best during the final heats in Launceston last Friday night.

Hayes held a slender lead going into the final two heats at The TOTE Racing Centre but he cemented the series win when he guided the aptly named $7 chance Reason To Dream to an all-the-way victory in the first heat.

Hayes ended the six-race series, held at Devonport, Hobart and Launceston, with 56 points to be a clear winner over Braden Howlett, Damian Spring and Braydon Withers who shared second lace on 39 points.

Hayes, 54, has been training for seven years but only decided to apply for a driver’s licence in 2010.

“I had my first drive on this weekend two years ago when I finished second on Mister Tehaych in the Ulverstone Cup at Devonport,” Hayes said.

Two years on Hayes has amassed 21 winners from limited opportunities.

Hayes is a mature-age reinsmen so he is eligible to remains in novice driver ranks for five years or until he has driven 40 winners, whichever comes first.

The maximum period for younger claiming drivers is seven years.

“When I first started driving I didn’t think I’d ever get the chance to compete in a series like this one,” Hayes said.

“I’d like to thank the trainers for putting their horses in these races so that everyone gets a chance.”

“If you look at our race fields each week you will see that we have a higher proportion of claiming novice drivers than any other state,” Neilson said.

“I’m convinced it’s a good place for novice drivers to learn the trade,” he said.

Hayes clinched the series by driving a winner at each of the three venues.

He partnered Our Last Knight to a stirring victory in Devonport before guiding Metro Master home in Hobart.