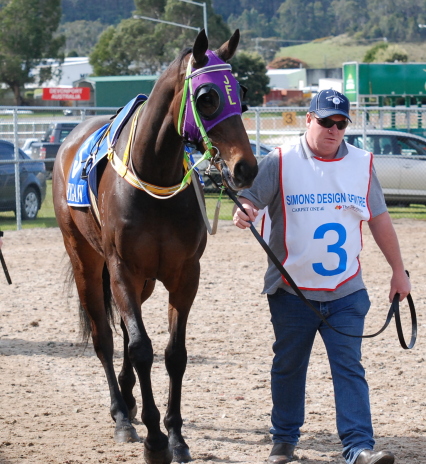 HEARTBREAK KID earned a reputation as a mud lark during his seven years as a racehorse with 11 of his 16 career wins coming on rain affected tracks.

So it came as no surprise to punters that the nine-year-old gelding finished at the rear of the field of five in an open handicap on a good track at Devonport last Sunday.

But what the punters didn’t know was that it was the John Luttrell-trained gelding’s swan song.

After facing the starter 102 times connections retired the gelded son of Steel Heart with a record of 16 wins and 25 minor placings and stake earnings of almost $215,000.

During his career he earned a reputation as a quality sprinter and a horse with character.

Heartbreak Kid might not have won at his final outing but he still showed there was plenty of spark left in his huge frame.

With that in mind, the horse’s owners were thrilled when Devonport horseman Shane Rodman asked if he could take the horse and train him for a new career in the equestrian ring.

Rodman has had success in the show ring with many former gallopers but needless to say probably none have arrived in his care with Heartbreak Kid’s impressive record.

Luttrell planned to give Heartbreak Kid his last start on the synthetic track at Spreyton so Rodman could transport the gelding to his property nearby.

“It all panned out well really,” Luttrell said.

“The owners of the horse had a meeting to discuss the horse’s future beyond racing and when Shane (Rodman) offered to take him as a show horse they (owners) it was a unanimous decision.”

“The horse is as sound as a bell and it is tremendous that he can spend the next part of his life doing something that he should love just as much as racing.”

“He won most of his races when my brother Michael (Luttrell) trained him and I’ve only had him fort the last part of his racing career and he won three for me,” he said.

The gelding was raced by a syndicate that included former jockey Terry McAllister who had his career cut short by injury that rendered him confined to a wheelchair.

McAllister often commented to the media after Heartbreak Kid won a race that the gelding epitomized the type of horse he always admired while he was a jockey.

Heartbreak Kid was a real favourite with punters early in his career although he won a couple at bolter’s odds towards the end that might have upset a couple of the hard core punters but all up he has given many people a lot of pleasure with his feats on the race track.

Rodman said Heartbreak Kid settled in well at his new home on a 60-hectare property at Sprent, which is located 10 kilometres inland from Ulverstone on the North-West Coast.

“Heartbreak Kid settled in really well and I’ll give him another couple of months to become accustom to his new surroundings before we look at setting out an education program for the show ring,” Rodman said.

“He has a former racehorse on either side of him Raging Bar and Flash Fantasy and when he gets down to the farm he’ll be met by a few more including Video Flyer, Chief Citation and Little Porkies.”

“He probably won’t start jumping education for at least two months but from what I hear he already knows a bit about the jumping caper,” he said.

Luttrell said Heartbreak Kid “jumped like a stag” in the bull ring during some pre-training workouts during his racing career.

Rodman said Heartbreak Kid’s show jumping career could start at the Chudleigh Show near Mole Creek in February next year.