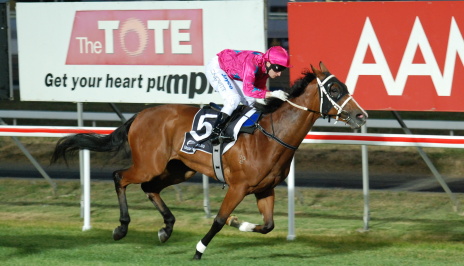 Heaven’s Choice was resuming from a 14-week spell and despite having to lead with pressure from a horse on her outside for most of the first 600 metres of the 1200-metre class one event she hit the line a clear winner over Faith’N’Courage and Lottie’s Lady.

The Gary White-trained daughter of Stratum was no stranger to the Launceston circuit as she won there o\-n debut last season, after which she was spelled and then sent to Melbourne for a short campaign that included minor placings in quality races at Sandown.

“This filly showed a lot of spirit to win tonight given that she was given no peace in front,” Newitt said.

“Gary (White) said she might be a bit vulnerable tonight because she was first-up without a trial but when they came at her she kept trying and in the end her class got her home,” Newitt said.

White said he expects the filly to be very competitive in a couple of feature races in the coming months.

“I haven’t made any firm plans as far as the races we will target for this filly but I do know she will be competitive in whatever she contests here in Tasmania this preparation,” White said.

The trainer would not discount the possibility of another interstate campaign.

“We will wait and see what she does at her next couple of starts but the fillies Thousand Guineas (1600m) is a possibility,” White said.

Heaven’s Choice is owned and raced by David and Louise Adams who paid $110,000 for the filly at the 2010 Melbourne Premier Yearling Sale.

Faith’N’Courage was gallant in defeat and could also be heading to the Thousand Guineas while third-placed Lottie’s lady did enough to suggest she has above average ability and could also pick up a decent race over the carnival.

The Aceland Stud Thousand Guineas will be run over 1600m in Launceston on February 1.