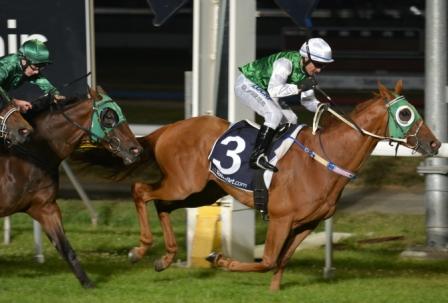 Hellova Street tagged race leader Snippetee Bee to the home turn where he charged to the lead and then had no trouble staving off all challenges over the concluding stages to score comfortably from Grand Tycoon with the winner’s stablemate Royal Rapture a game third ahead of Arenzano.

The lightly raced four-year-old has yet to be tested beyond 1200m but Brunton is adamant the Helike gelding will be as good up to 1600 metres and beyond.

“I have always believed this horse will be as good if not better when he gets out to 1600m and beyond,” Brunton said.

Hellova Street won first-up in late October and was then freshened up to win the Newmarket Handicap.

He went to Hobart for the Winzenberg Quality Handicap but dropped back in distance (1100m) and that proved to be the source of his downfall although he still ran third to Grand Tycoon.

While Hellova Street was impressive the run of Grand Tycoon also was full of merit and Royal Rapture also proved he will be competitive in upcoming weight-for-age events.