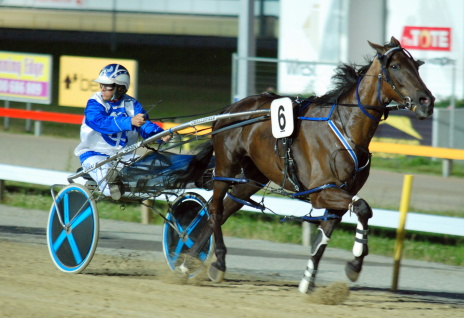 PROMINENT Victorian standardbred owner Eric Anderson made a clean sweep of the feature races on the 10-event card at Tattersall’s Park in Hobart tonight.

Anderson, his trainer Glenn Douglas and his star reinsman brother Daryl combined to win the Tasmania Cup with Heza Trick, the George Johnson with star mare Make Mine Cullen and the Tasmanian Guineas with talented three-year-old The Dip.

It is the first time the three feature races have been won by the same owner, trainer and driver when run on the same program.

Anderson was understandably thrilled with the result, in particular the win of his promising five-year-old Heza Trick that has taken the harness world by storm of late.

Heza Trick was eased back at the start of the Tasmania Cup while Thirsty Mach showed blistering early speed to lead from gate five.

But when the pace slackened Douglas sent Heza Trick around the field 1800m from home to assume control and the New Zealand-bred gelding was never headed on his way to an effortless win over Thirsty Mach with another Of Anderson’s team Jukebox Music only a neck astern.

Heza Trick will now head to South Australia for the SA Cup on January 14 in which he will more than likely encounter Australia’s best pacer Smokin Up.

Anderson was humble in accepting the winner’s trophy.

He said the Tasmania Cup was a race he hand longed to win and felt proud to have been associated with the winners of all three features on the card.

Listen to what owner Eric Anderson had to say about his clean sweep of al three features on the card at Tattersall’s Park – click here.