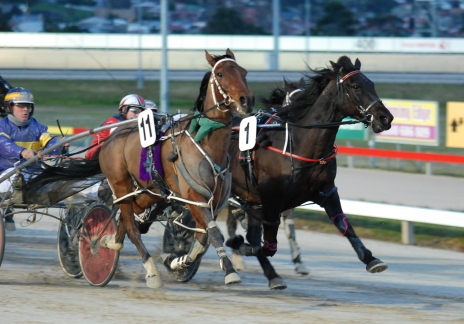 SLOW maturer Sugastikysweetstuf may yet realise his potential according to his trainer Rohan Hillier.

Sugastikysweetstuf scored arguably his best win when he powered home in extreme conditions to defeat Gavrail in a C1 over 2090 metres at Tattersall’s Park in Hobart last night (Sunday).

With Hillier in the cart, Sugastikysweetstuf settled in the one-out line and three-back while Gavrail made play and set a reasonable pace.

Gavrail’s driver Todd Rattray stacked them up from the 500m and kicked clear turning for home but that’s when Hillier extricated his charge from the pack and set sail after the leader.

Despite laying in a bit close to home Sugastikysweetstuf gained the upper hand close to home and hit the line almost a metre clear of Gavrail with Rustler Boy about four metres astern.

Sugastikysweetstuf (Modern Art-Late Arrival) has had only 13 starts for three wins and six minor placings for $17,200 in stakes.