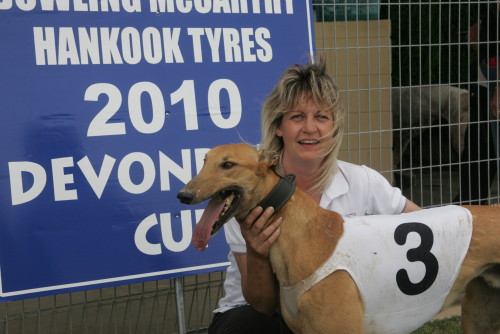 Tonight’s Invitation (R6) at Tattersall’s Park should be a close tussle between Mark Sutcliffe’s Fisherman and Debbie Cannan’s Accounts.

Fisherman has been a model of consistency and is looking for win number ten on the Hobart circuit.

His last two starts here need to be overlooked as he was badly checked in both the Gold Cup Final and the Hobart Thousand heat and followers should go on his 6 ½ win beating Paua to React in the Gold Cup heat on 18th November.

Accounts has had 16 starts here for 5 wins and 7 placings and was finishing powerfully in last week’s Invitation when second to kennelmate Regent Typhoon.

His interstate record is first class and he appears to be relishing racing on his home track and this may just give him the edge.

Len Howard’s Blue Buddy has had no luck at recent starts and may be one for the trifectas.

This daughter of Where’s Pedro for Richmond trainer Margaret Rossendell was unlucky last week behind Chill Pill but ran Miki Moto Mike to just over a length at the previous week and that run was good enough to go close in this.

Dude is having his first start in the State for Susan Gittus and will her main opposition jumping from the red while Makari Girl is always a trifecta chance.

Capetown Annie (R8) and litter sister Capetown Jessie (R10) will be good value at each way odds as both seem to enjoy the spacious Hobart track.