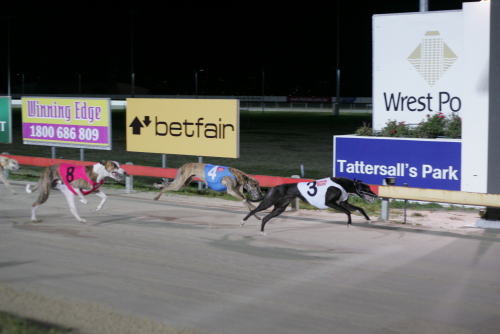 GREYHOUND racing will reach boiling point in only four weeks when the heats of the Group One Hobart Thousand will be run on December 9.

Tonight heats of the Betfair Gold Cup take place and already a number of mainland entries will have their first look at Tattersall’s Park.

Ex Tasmanian Rod Herr has travelled from Buccam in Queensland with his Group Two Ipswich Auction quinella Fight Force (R2) and Iron Force (R8) and both will improve after a run on the track.

Fight Force is up against Minister’s Gift winner Ella Lucy and consistent performers Posh Luke and St Pierre in Heat one while Iron Force stayed away from the Heats to tackle an easier grade 4 but will be up against Ian Callinan’s form runners Paua to Destroy and Hez Regal.

John Harris from Doyalson on the Central Coast of NSW has Emo Appeal (R3) and Frank Sannette (R4), both very experienced greyhounds.

Emo Appeal has won 15 while Frank has won 12 both winning at Wentworth Park in smart times. Emo Appeal will have to contend with 2008 Hobart Thousand placegetter Excel Like Time down from NSW and locals Lizzie Jay and Callamac Blaze.

Frank Sannette has a harder task against track specialist Sultan’s Swing and speedsters Cradoc Park and Luke’s A Missile.

Track record holder Damek (R5) will look to extend his unbeaten record on the track to ten while Fisherman (R6) and Eagle Eye (R7) should qualify for next week’s final.