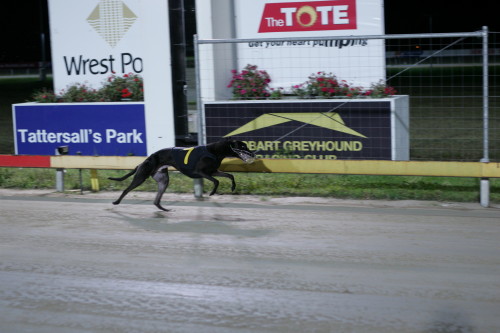 This Bond pup will need to jump well from the red, because he can be tardy early, but he has a personal best around Devonport of 25.89 beating Indecision and a repeat of that run tonight will see him score easily.

Shanlyn Sparky for Graeme Moate ran a solid third at his first start in Tasmania behind Pedro’s Pirate in mid February and will run well fresh, while Ella Lucy is immature but she does have ability.

Secret Herbs won on Tuesday and as the race is for Maidens will be ineligible to start, while 1st reserve Whitney’s Wonder won on Monday night securing a start for Rebel Patch.

The Easter Cup final (R6) should be a terrific clash between High Choice and Akka Boy.

The blue box represents some concern as she has only won three from twelve, Akka Boy has to contend with Little Spaniard on his inside who will race hard from box rise and for that reason will again place top bitch High Choice on top, narrowly from Akka Boy.

Thirteen Black looks to have the Easter Plate Final in his keeping after a sensational run last week in his heat running BON 26.05 winning by 4 ¾ lengths over Troublesome Miss who again looms as his main danger while Magpie Lomar should be kept safe.