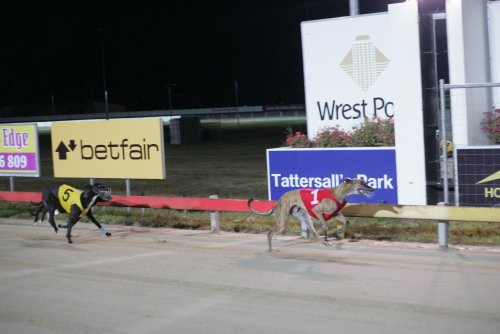 This son of Pure Octane blew the start last week and gave himself the hopeless task of chasing all the field but by the home corner he had railed his way through and although well beaten by eventual winner Serena Bee motored into second placing.

His lastest win at the end of January when he beat Posh Gem in 26.42 was full of merit and he loves the rails.

With Tisdale drawn inside him he should position himself well early and will take plenty of catching.

Chiko Roll for Brighton trainer Susan Gittus has excelled in her two starts back from injury and will be the hardest to beat while Tisdale and veteran Regent Tornado should run well.

Debbie Cannan has this daughter of Where’s Pedro flying at the moment and jumping from seven gives her the room she likes to take up a good position early most probably behind early leader Rocket Moss who will be the hardest to beat.

Another front runner Perfect Socks could sneak a place, while Not Strirred should be taken in the multiples.

The brilliant Akka Boy (R3) looks well graded over the 599m trip. Having recorded his personal best time in a sprint at Devonport Tuesday he should set up an early break on this field and be too good in the run home.