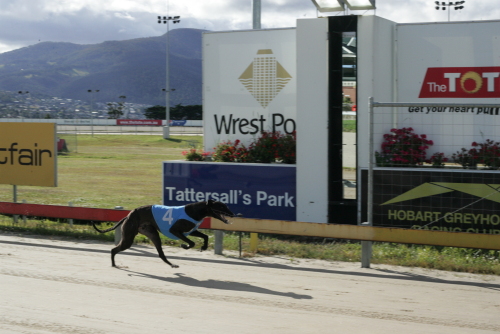 Victorian Super Joe Cool (R6) for Mangalore trainer Mick Stringer has a strong chance to record his first win in Tasmania in the Invitation tonight.

This Brett Lee speedster had a reasonably successful Devonport Cup series running second in the Heat to Shunted and followed up with a third in the Consolation and hasn’t raced since. Having won 25 races in Victoria from Healesville to The Meadows, “Joe” should be well placed here off the red. Hardesr to beat will be the flying Rocket Moss who led all the way in last week’s Invitation and Pure Thirst who has had no luck at his last two.

Troublesome Miss (R7) for Mount direction owner trainer Wayne Williams only ventures South occasionally and usually heads home a winner when he does.

At her last start she flew home at Devonport for second to the in-form Sting and her finishing burst up the long Hobart straight should see her score her first win at Hobart since July.

Callamac Blaze will be the hardest to beat while the lightly raced Tisdale for Richmond trainer Len Howard should be kept safe.

Daegan (R3) should continue on his winning way for Invermay trainer Eileen Thomas.

Having won three of his last four starts, this Big Daddy Cool pup is no longer living in the shadows of brothers Damek and Decembrist and looks first class as his flying 25.64 last start win at Devonport signifies.