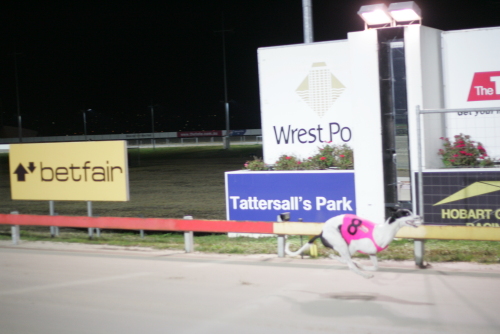 Hobart bookmaker Barry Heawood who is also a life member of the Hobart Greyhound Racing Club will sponsor the main race on tonight’s program the Hobart Thousand Prelude (R6).

Octane Assassin trained by Gary Greig has won his last two and from the pink box will be very hard to beat.

This awkward son of Pure Octane loves galloping room and although checked a number of times still won well at Launceston Monday night albeit in a lower grade.

Veteran Eagle Eye will jump from one and looks the early leader while Perfect Socks and Cradoc Park are racing well and both will have benefited from last week’s run.

Ginger Jet (R3) looks a special on her current form after an easy win at Launceston on Monday night while Minister’s Gift winner Ella Lucy (R5) should prove too speedy for her opposition.

Interstate nominations for the Group One Hobart Thousand close today with a number of top interstate greyhounds already confirmed. Darren McDonald and Graeme Bate will be sending teams across including Octane Show, Ashton Lucas, Gripen Bale, Zambola Bale and Greta Bale, while other interstate nominations include Numero Uno Bale, Bandanna Lad, Banger Harvey, Pulp and last year’s winner Prankster who is hoping to be the first back to back winner of the Thousand since Ophir Doll in 1961 and 1962.

Former Tasmanian greyhounds coming back from Interstate campaigns include Damek’s brother Decembrist, Accounts and Droopy’s Fool and then we have Tasmania’s best including Damek and Sultan’s Swing just to name a couple and it is going to be one very hotly contested series.