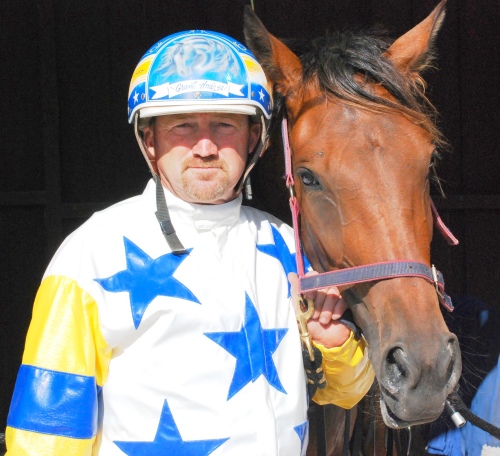 GRANT HODGES has become a dominant force in Tasmanian harness training ranks since he ventured across Bass Strait from Victoria about five years ago.

In Launceston on Sunday night he collected a career-best five wins on the nine-race card, three of which he drove himself while the remaining two were driven by his partner Erin Hollaway.

One of the most impressive of his five winners was first-starter Saturday Nights that led throughout for an effortless win in the Tasracing 3YO Pace over 2200 metres.

Hodges slowed the pace midrace but when he released the brakes 400 metres out the gelding left his rivals in his wake and went on to score by almost 17 metres from Safina Leis with Peace Chief a metre astern.

Hodges was surprised with the ease of the win.

“He’s still so green and to be honest he never gave me the impression that he could win a race like that,” Hodges said.

“I only took him to the trials twice for a very ordinary effort at his first attempt but at his second trial he performed a lot better when he led and won so I thought the penny might be starting to drop.”

“I gave him a week off after the second trial but he never went back to the trials again.”

“He might just be one of those horses that takes the next step when he goes to the races,” Hodges said.

Saturday Nights is owned by Lloyd and Judy Whish-Wilson who purchased the son of Blissfull Hall-Breeze Baby privately after the horse was passed in at the Tasmanian Yearling sales in 2009.