Hodges has a night out 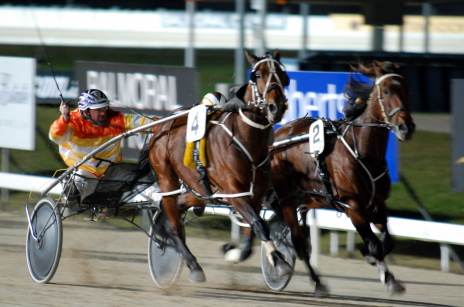 BRIDPORT harness trainer-driver Grant Hodges is enjoying his best season in Tasmania and the winners kept coming at Tattersall’s Park in Hobart on Sunday night.

Hodges took only four of his team to Hobart and emerged with two winners but he also landed the trifecta in one race.

His star four-year-old Saturday Nights strolled to an effortless win in the Boags Stakes over 2200 metres, scoring by almost seven metres from Ashinaga with outsider Zurbaran over 10 metres away third.

Saturday Nights was driven by his trainer who allowed him to park outside of the leader Im Le Freak that set an honest pace in front.

When Hodges released the reins in the back straight the last time Saturday Nights quickly forged to the lead and set up a winning break.

The minor placegetters came from well back in the field while the leader capitulated in the straight to finish a clear last.

It was Saturday Nights’ seventh win from only eight starts but Hodges has only just realised he could have a real good horse on his hands.

“At first I thought he might be a horse that would win a couple of races because his work on the training track was far off what real good horses usually show,” Hodges said.

“He had a real lazy attitude around the stable and still does have for that matter but he keeps stepping up to be counted on race nights.”

“This time in he is more mature and his trackwork is a bit sharper than he showed last preparation.”

“It’s still a learning curve for the horse so having seven wins from eight starts with still plenty to learn suggests he does have a very bright future,” he said.

Saturday Nights is owned by Lloyd and Judy Whish-Wilson who purchased the son of Blissful Hall-Breeze Baby at the 2007 Tasmanian Yearling Sale.

Hodges says Saturday Nights has done a great job working through his classes and confirmed he could be one of a “truckload” of horse he plans to take to Victoria later in the year.

Gettysburg Address was sent around an $8 chance with Yushchenko Leis at $10 whileSky Tower was backed in to start the $2.30 favourite on the strength of his game second in the Easter Cup in Launceston last month.

It is not the first time Hodges has snared a race trifecta.

“I’ve had the trifecta a couple of times and once I had the first four placings in a race,” he said.

Hodges is working a team of 24 at his Bridport training complex on the North-East Coast but says he has another half-dozen waiting to come back into work.