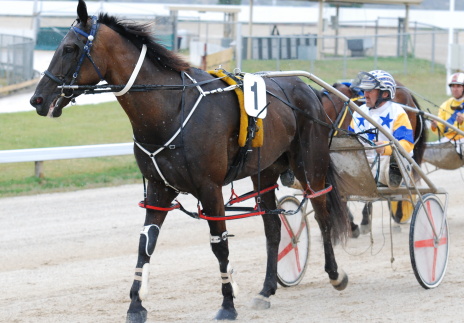 FRIDAY LUNCH gave his rivals a pacing lesson in Hobart last Sunday night with an impressive all-the-way win in the Light Harness Tasmania Pace over 1609 metres.

The Grant Hodges-trained gelding made full use of the pole position to lead comfortably and despite being pressured for the final 600 metres he emerged triumphant by over three metres from Iden Noshot that trailed the leader throughout with Prettyboytoby a metre astern.

It was a game effort from the five-year-old that has only been in Hodges’ care for about three months.

He was coming off an impressive win in Launceston at his previous outing in which he also led from a good front row draw.

The gelded son of Dieberspace had only modest form in Victoria before being dispatched to Tasmania.

He won three of his first six starts on provincial Victorian tracks in late 2010 but then his form waned with only the odd minor placing from 12 subsequent starts in his home state.

Hodges said Friday Lunch had potential and he would be surprised if the gelding didn’t win more races.

Listen to what trainer Grant Hodges had to say about Friday Lunch’s latest win – click here.