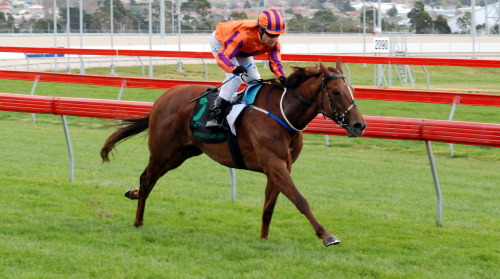 SPREYTON based trainer Darryl Horner has high hopes that one of his latest stable additions Gee Gee Jeuney can make an impact in staying events around carnival time.

It was an impressive performance as the lightly raced seven-year-old gelding unleashed a run from the 600-metre peg and powered up the home straight to score by 3-1/2 lengths from outsider Midnight Flit with Lytuppa almost twp lengths astern.

The grey was having only his 11th start and third outing in Tasmania and he was well handled by in-form apprentice Jacques “Johnny” Luxe.

It was the second leg of a winning stable double. Horner also saddled up former Robbie Laing reject Randburg to win the Become A Member 3YO and Up Maiden Plate over 1400 metres.

Randburg (Johannesburg-Aspen Highlands) came from well back in the field to score an impressive win, although it was a gem of a ride by Stephen Maskiell who saved plenty of ground and tracked the leaders into the straight before easing his charge around heels to challenge 200 metres out.