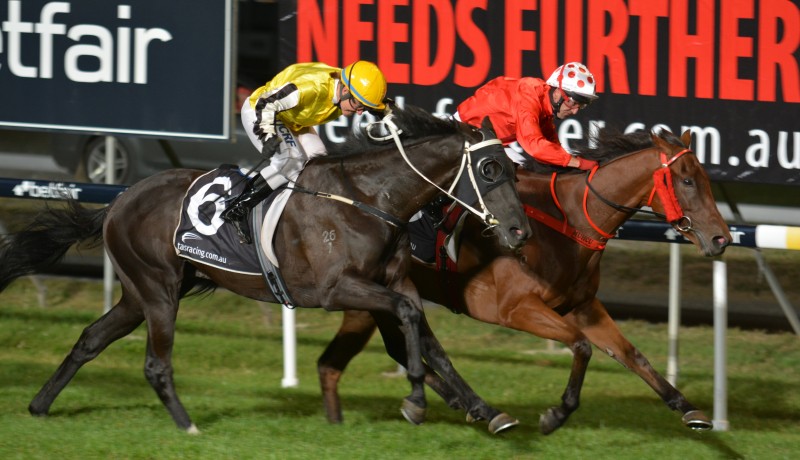 PROMISING stayer Hugo secured a berth in next week’s Betfair Launceston Cup when he scored a narrow but game win in the Sydeston Night Cup over 2100 metres at The TOTE Racing Centre in Launceston last night (Wednesday).

Hugo was challenged and headed by the well-backed Valdez (Clare Lindop) in the home straight but Hugo fought back and held a narrow advantage when they hit the line almost in sync.

The Night Cup winner earns ballot free entry into the Launceston Cup if nominated for that race and trainer Brendan McShane confirmed the four-year-old gelding would take his place in the field if he emerged from this latest assignment unscathed.

“The horse had a couple of issues after he had a very tough run at his previous start but from what I’ve seen straight after this race he looks to be quite normal so I would expect him to run in the Cup,” McShane said.

Hugo went into the race on the back of three consecutive seconds in lower grade races over distances ranging from 1400m to 2100m.

“I have no doubt this horse will run out a string 2400 metres of the Launceston Cup and winning this race may have been our only way into the race,” he said.

Hugo is one of 19 that have nominated for the Launceston Cup with the final field to be released tomorrow.

Hugo was ridden by stable apprentice Bulent Muhcu who was riding at his last Tasmanian meeting before heading home to Turkey.

Muhcu has purchased a one-way ticket home but said he will return to Tasmania after he has fulfilled a family commitment.

The barrier draw for the 2015 Betfair Launceston Cup will be made at the TOTE Racing Centre on Sunday at noon.